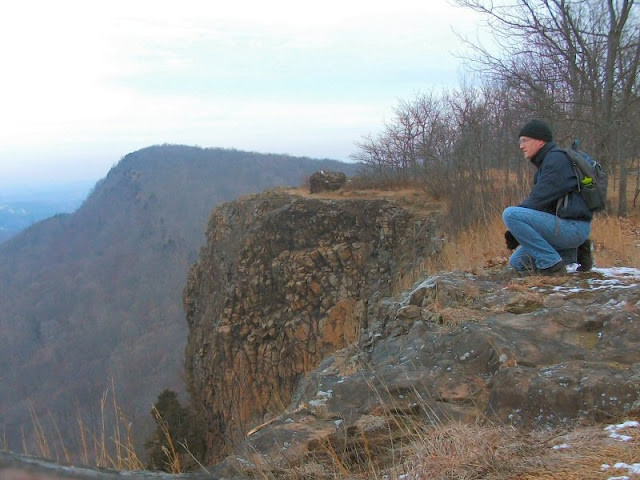 This hike started at Route 66 in Middlefield, then north to in . The section of the Mattabesett runs along another of the string of trap rock cliffs of the Metacomet Ridge.  Like the Beseck Ridge section to the south, has a long line of scenic outlooks to the north, west and south.
Starting from the parking lot, follow the blazed and rocky connector trail a short distance north to meet the blue trail.  Head west, parallel to Route 66, and pass junctions for two local trails.  And then it’s time to climb the mountain.  The trail heads up the hill, switchbacks in the steeper sections, and opens to a view south toward Black Pond and Beseck Ridge.  A little farther, the trail leads along the edge of the cliffs, giving you fantastic 180o view.  On a clear day, you can see from Long Island Sound to .  Today, it’s a little hazy.  We didn’t get the snow predicted, but it’s cold and cloudy – perfect day for a hike!

is a two-humper.  Follow the trail downhill into Preston Notch (which marks the border here between Middlefield and ), then continue back uphill to the peak of (892’).

There are warning signs along the Mattabesett here – the trail leads right along the cliff edge.  While that gives you great views, it can be a little unnerving if you’re not fond of heights.   Along the ridge, there is an alternate trail that stays a little farther away from the cliff edge – leads around the steep rocks and pops out at spots with the best views.  It’s not marked, but it well worn and easy to follow.


At about mile three, I met the crew from Sleeping Giant coming the other way.  What does a trail crew do in the off season?  Hike other trails, of course.  When you’re hiking with a group, it’s good to know the ground rules – are they a “unless you’re five minutes early, you’re late” crowd, or is the 15 minute rule in place?  I was supposed to meet them at the Route 66 parking lot for a car drop and then hike the trail back one way.  But I just missed them, so decided to hike out and back instead.  That would only make it about 9 miles, and the weather was OK.  So why not?  Anyway, we stopped for a snack, and they continued south while I headed north.
The trail winds its way northeast down the mountain along a woods road in the Middletown Water Company property.  It levels off, leading through a Hemlock grove – another victim of Woolly Adelgid.  You pass a junction for the Blue/Red trail marked for , and then work your way to out to the trailhead on .  Try to ignore the piled truck tires and keep out signs.  These are remnants of a closed ATV park.  The trailhead is set back from the road, tough to spot unless you know what you’re looking for. 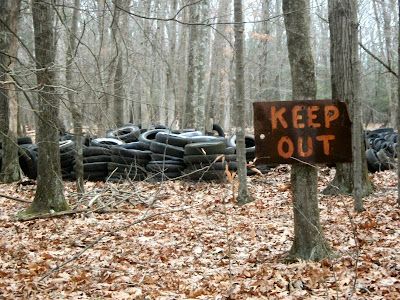 Once at the trailhead, I took a quick break and headed back south again.  Blue/Red blaze trails are often alternate routes giving you the opportunity to see different scenery in a Blue Trail loop hike.  Since I wasn’t planning on making this trip, I really didn’t check the maps before coming out.  If this was an alternate trail around , that would be good to check out, right?  As it turns out, it is just a connector to on – a flat walk through forest, across stream and fields, to the park.  It gives you another parking / starting spot instead of trying to get one of the two spaces on .  But for me today, it was just a two mile detour right back to the same spot! (Note – the connector trail is shown on the Meriden Land Trust map at the beginning of this post)
Back on the Mattabesett, the trail climbs more gradually up to the ridge again.  From the top, it was about an hour’s hike back along the ridge and down to the parking lot.  I passed a couple more groups of hikers along the way, out enjoying the brisk day and views (yep, it was getting colder!)  One guy was trying to balance his water bottle, climb a rock section and still watch his phone – Manning was just intercepted.  Never let anything get in the way of a Giants game, I guess.

A Walk Across the Giant - dayhiking some of the most beautiful spots around. National Parks, Stateparks, Connecticut Blue Trails, Colorado Trails, or anywhere else I end up.

Jim
Weekday desk jockey, weekend wanderer. I love the outdoors. I look out and watch it from my office window all week. Weekends I get out and stretch my legs. And then blog about it. 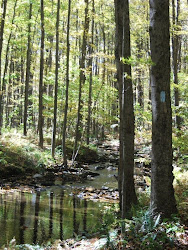